5주차. Is using frameworks good for programmers in the long run? 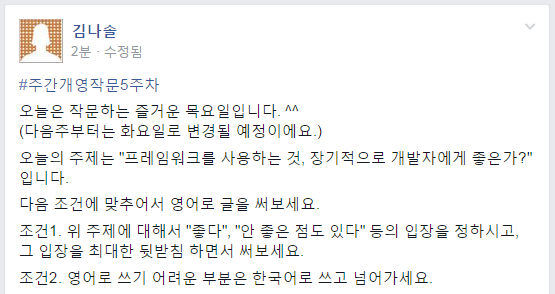 We disagree with the claim that frameworks weaken programmers' programming skill.
The tendency of using frameworks is sort of a paradigm shift. It's like that the transitions from Assembly to C or from C to Java turned out to be an evolution in technology as our past shows.
We agree with that core developers are needed. But now all developers have to be a core developer. According to the concept "paradigm shift" by Thomas Khun, most developers follow and use newly introduced paradigm, while only a few genius developers invent new paradigms themselves.
Using frameworks is also a new paradigm of programming to develop a project fast and to save programmers from going through many trials and errors which many programmers have been suffering from.
It takes too long time for a normal programmer to understand from the basics at a low-level to the high-level applications, which also seems to accelerate the rapid spread of using frameworks.

We believe using frameworks have a negative influence on programmers' programming skills and the development of a language in the long run.
First, a framework allows a programmer to make a program fast but it doesn't necessarily help him to understand the cores well.
Take Spring, for example, if a, he programmer develops using only Spring F/W, he won't have enough chance to get a deeper understanding of the Java language. If he doesn't have Spring, he can do nothing.
Also, using frameworks, programmers tend to lose interests in basic stuffs, because they can easily develop a program without understand the cores.
Someone has to be able to make cores. If everybody only uses a framework, who will make one?
We're not saying every framework leads to such a result. There are two types of frameworks. One type is a framework which helps a programmer develop understanding of a language and programming as he programs with the framework. On the other hand, the other type such as Spring, only focusing on fast development of a program, hides underlying processes and deprives programmers the opportunities to learn.