For this explanation, I need to refer to the two numbers being subtracted. Their proper names are the minuend and the subtrahend. The subtrahend is subtracted from the minuend, and the result is the difference:

To subtract without borrowing, you first subtract the subtrahend not from the minuend but from 999:

After you've calculated the nines' complement of the subtrahend, you add it to the original minuend: 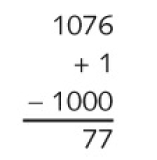 You're finished. The result is the same as before, and never once did you borrow. Why does this work? The original subtraction problem is

If any number is both added to and subtracted from this expression, the result will be the same. So let's add 1000 and subtract 1000:

This expression is equivalent to

Now the various numbers can be regrouped, this way:

And this is identical to the calculation I demonstrated using the nines' complement. We replaced the one subtraction with two subtractions and two additions, but in the process we got rid of all the nasty borrows.